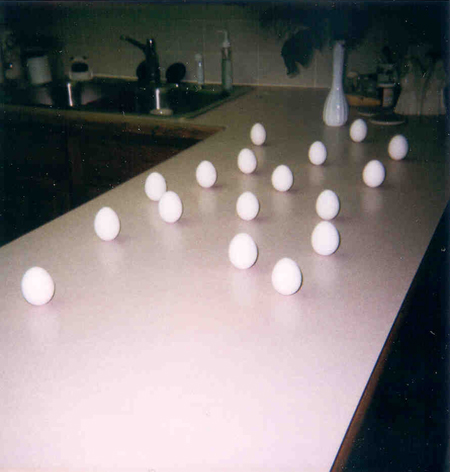 Check this out! On Saturday, March 20, 1999, at 9:10 p.m. EST, we managed to balance 17 eggs on end! How was this done, you ask? This is a classic example of what you can do when the equinox occurs, which happens twice a year. The equinox is a period of time when the allignment of the earth with the sun is in a state where the equator gets the most sunlight. The tilt of the earth's axis causes certain things to happen, such as seasons. It just happens at this moment in time, the gravitational pull is so evenly distributed, that you can easily balance an egg on its end! We were lucky and managed to get 17 of them up! This only lasts for a small window of time, so if you miss one opportunity, you'll have to wait another six months to see the next equinox.

Even more impressive is that the last egg remained balanced until it was accidentally knocked over on Tuesday, March 23, 1999 at 9:45 p.m. EST! Yes, it remained balanced for more than 72 hours stragiht! Who knows how much longer it could've stayed balanced if no one had touched it?

Update: In order to prevent any misunderstandings, as some have pointed out, this trick can be performed at any time of the year. I have simply found that the eggs appear to be easier to set up during the equinox. Another fun fact is that the world record for number of eggs balanced was nearly 500 during a spring equinox in the 1980s! I'll look for the exact figure from the Guiness Book of World Records in another update.

Back to the Main Page